New Year’s Decorations in My Neighborhood 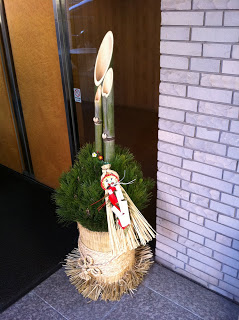 I always enjoy returning from the US after New Year’s or Oshogatsu in time to see all of the special holiday decorations. Usually, by the end of the first week of January they start to disappear. When we came back from the airport, we were greeted by the Kadomatsu ornament pictured above that, along with its mate, flanked the front entrance to our building until a couple of days ago when it was quietly whisked away. It always makes me a little sad to see the spent ornaments standing by the side of the road, waiting for the garbage trucks, and marking the real end of the extended holiday period. I do not know the fate of our ornaments.

Oshogatsu is a big deal in Japan and lasts for several days when the whole country basically shuts down and many people travel either back to their hometowns or abroad. In preparation for the arrival of the new year, people in Japan have a number of customs including bonenkai parties to say good-bye to the old year, the giving of seasonal gifts (such as boxed cookies or canned fruit), and Osoji, the thorough cleaning of shops, offices and homes. Intended to start the new year off fresh, this custom may have more secular overtones today but stems from the ritual purification required prior to a visit from the Toshigami deities thought to drop in this time of year.

Once the premises are spic and span, many people adorn their home or work place with one or more decorations. There are three main types: Kadomatsu, Shimekazari and Kagamimochi. The following is a round up of adornments I spotted in and around my neighborhood.

KADOMATSU. Made of pine sprigs, bamboo, strips of zig-zag shaped, folded white paper called shide, and other decorative elements, this ornament (or pair of ornaments) stands beside the front gate or doorway to a building, residential or otherwise. Symbolizing longevity, vitality and good fortune, Kadomatsu are often free-standing but I have also seen them attached to the outer walls or gateposts. 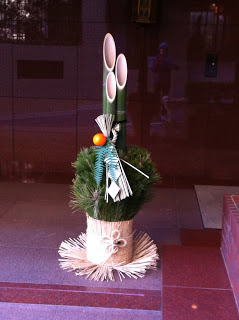 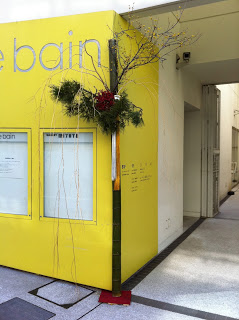 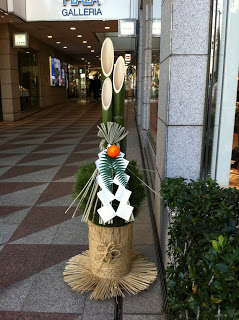 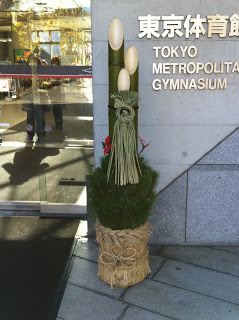 SHIMEKAZARI. Sometimes shaped like chains or wreaths, these ornaments are attached to or above the exterior door. They usually consist of ropes of straw, dangling strips of white paper shide and other decorations that all have symbolic meaning I am sure. Apparently, the original purpose of Shimekazari was to welcome in the Toshigami deities and keep evil spirits out. Some people attach Shimekazari to the front of their car for traffic safety but I have not seen any examples this year. 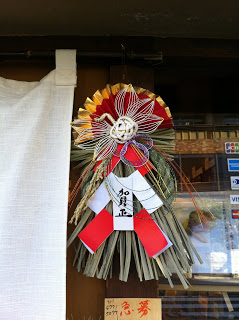 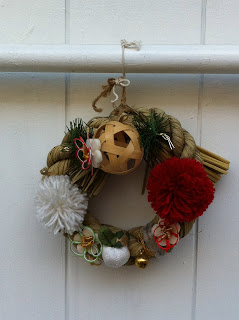 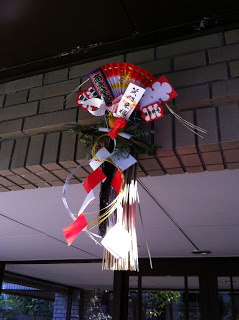 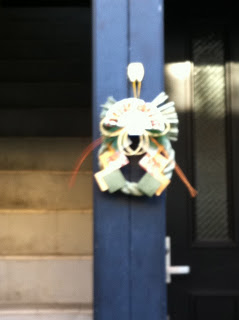 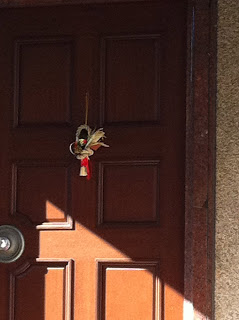 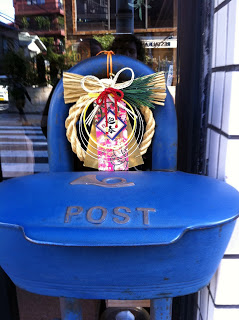 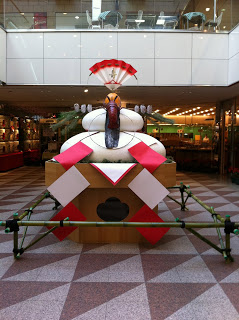 KAGAMIMOCHI. Resembling a sumo wrestler in his preparatory squat, this is a two-tiered cake, the bigger layer below and the smaller one on top, made of pounded rice or mochi crowned by an orange. Recalling (sort of) the round mirrors that are a sacred objects in Shintoism (kagami = mirror, hence the name), the cakes sit on a special stand called a sampo that is placed in the household altar as an offering to the Toshigami. While some people go the whole nine yards by pounding mochi of their own, ready-made Kagamimochi is easily obtained at most supremarkets. Plastic versions also abound. The more elaborate Kagamimochi (like the giant version pictured below) are augmented with kelp, dried persimmon, lobster and other delicacies laden with symbolism. On January 11, or Kagami Biraki, kagamimochi may be opened and eaten.