The Saga of Pippi’s Pink Ball 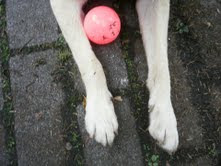 This is a very sad story with a surprise, happy ending. Last weekend, David and I took Pippi on a walk to Tokyo Midtown. While David was inside, Pippi and I remained outside on the wood deck wrapping the rear of the building. Amazingly, a shiny, pink ball with the perfect squishy consistency stood in the middle of the deck, as if waiting for Pippi. Needless to say, this made our wait pass quickly as we played our special brand of Catch followed by Fetch. Pippi is a dexterous dog indeed!

Shopping concluded, the three of us headed for home, pink ball in tow. By the time we reached our apartment, the ball was a bit of a slobbery mess but that is par for the course. Pippi relinquished the ball for a brief stint to eat dinner but then back in the mouth it went. And there it stayed pretty much all evening. When we decided to get into bed, Pippi settled into her favorite spot on the red chair, the pink ball tucked cozily under her chin. 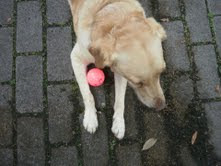 The next morning, Pippi and I got up and, per our usual Sunday morning routine, headed off to Arisugawa Park with the precious pink ball. When we got to the park, I unleashed Pippi and we played Fetch in our various favorite spots — the paved area, the parking area, the dirt square and, finally, the earth area with the stone fountain. 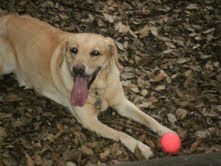 After all this running and retrieving, the girl had worked up quite a thirst. So we paused our play to have a drink. Now this particular fountain has a stone basin at the bottom where Pippi likes to sit while lapping at the water as it descends from the spigot. The lapping, of course, required the release of the pink ball. And that’s when disaster struck.

The thought had crossed my mind earlier that I ought to “water” (the Ward Office’s word, not mine) Pippi at a different fountain where there was no threat of a gaping drain hole. But here we were. By now, you can probably guess what happened. No sooner had the pink ball left Pippi’s mouth when down into the drain pipe it went, vanishing without so much as a trace. In the blink of an eye, it was simply gone. What a catastrophe.

Once Pippi was done drinking and realized that her adored pink ball was no where in sight, she began searching and nosing frantically. In the bushes. In the rocks. Under leaves. And, of course, in and around the fountain. Oh the frustration! I joined in the hunt in the hope that I might find the drain’s outlet. We ventured all the way down to the little creek but there was no sign of the pink ball. Made me very glad that Pippi never had puppies. The poor dog would have been beside herself if we had to give them up.

Then I had an idea. We went back to the middle of the park, where the dog community was out in force. Navigating between the Chihuahuas, Akitas, toy poodles and their respective owners, I approached one of my dog buddies, a slight man with a pony tail and a lab (chocolate) of his own. I explained the situation and he immediately was on the case, first with repeated recitations of that all-purpose word of reassurance “daijoubu” and then with an offer of help. Together we returned to the crime scene and he lifted the heavy, concrete lid from buried box where the run-off gathers. There, bobbing playfully on the surface of the water was the pink ball. Yokatta! 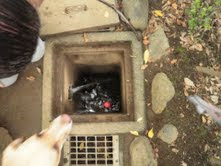 Unfortunately, the water level was a bit too low and our arms were a bit too short to be able to grasp the ball. My pal then got the brilliant idea of trying to retrieve the ball with two twigs, chopstick-style. This still did not work. But about the same time an older woman approached the fountain and turned on the tap. Well, as the water exited the fountain and entered the drain, the water level in the box rose and the ball inched closer. I was beginning to get that warm, fuzzy, alls-well-that-ends-well feeling. And that’s when disaster struck again!

Regrettably, the consequences this time were much worse. Unbeknownst to us, there was a hole in the side of the concrete box to siphon off water and prevent overflowing. And, just at the moment when success was so close that we could practically taste it, the ball slipped inside that hole and began its descent to the underworld of the park’s sewer system.

His rescue efforts foiled, my friend crept away, tail between his legs. Pippi and I then went back to the creek and the pond in the hope that we might find the pink ball playing Hide-n-Seek in the reeds at the edge of the water. But to no avail. I felt miserable. Pippi was pretty glum too.

But Pippi’s mood did not last long. An eternal optimist, that dog found yet another ball. A little slimy and its surface a bit worn away, the new find was no match for the old one but at least it enabled her to leave the park and get on with her day. This is more than I can say for myself — I am quite certain that I felt worse about that errant ball than Pippi did. I silently vowed to head over to the caretaker’s office the next day to see if there was any recourse.

Well, the next day came and I got very busy with work but Pippi and I made our way back to the park eventually. En route, I planned my script — I could not admit that the ball belonged to my dog since it is against park rules to play with dogs off leash. Instead, I decided to say that the ball was my child’s favorite toy. No further explanation needed. Amazingly, as we walked along, Pippi found yet another ball whose days of glory on the tennis court were long gone. I explained to Pippi that if she insisted on carrying her new treasure, she was going to blow my cover. But she simply averted her gaze. I decided I would cross that bridge if and when I ever came to it. And, as the caretaker’s office was closed, said crossing was not happening on that Monday.

By this time Pippi had clearly moved on to other balls and I had resigned myself to forging ahead sans pink ball. I thought about chronicling this saga on my blog and decided against it since the story, I felt, was simply too sad and I really did not want to rehash it or remember it.

But, as it turned out, fate intervened. On Friday, I had to go to an interview near Asakusabashi Station in the heart of the wholesale, cheap toy district. The meeting went swimmingly and on my way back to the station I popped into one of these toy distributors to see if, by chance, they might have squishy, plastic balls in stock. Eureka! There they were. Maybe not the exact same model but a very, very close facsimile. I asked the shop keeper how much and he told me I could have the bag of twelve balls for Y800. Elatedly, I made my purchase and then beelined it back to the station. I could not wait to get home and show Pippi.

While Pippi was extremely excited by her new acquisition, she does not harbor the same attachment to the new pink ball that I gave her immediately. But she does like it a lot. And this time, if the ball makes a wrong turn, we have eleven others.

This entry was posted in blogs, thethingis and tagged ARISUGAWA PARK, ASAKUSABASHI, PIPPI. Bookmark the permalink.