A cautionary tale about losing a car and finding a yarn store. 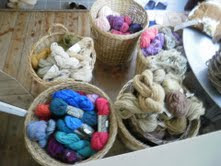 It is not everyday that one has the good fortune to stumble upon a yarn store in Tokyo. But when I do, it is the cause for a minor celebration, or at least lifted spirits and a yarn purchase. A ball of beautiful yarn has so much potential! Just imagine the hat or scarf it could become!

The other day I went to interview an architect. I have visited this fellow several times but, like many young Tokyo designers, he keeps changing offices hermit crab style as his practice grows. The last time we met was the first time I visited him on the top floor of an old warehouse-type building in central Tokyo. On that occasion I elected to drive since his office is not far from my home but the subway route is a bit circuitous. When I found a friendly parking lot that seemed close to his office I ditched the car and decided to hoof it the rest of the way — parking spaces can be very tight in Tokyo so I have learned to choose carefully.

After a few minutes on foot, I realized that none of the landmarks on the architect’s map were anywhere in sight. So I did what any street savvy gaijin would do: hop a cab and let the driver sort it out! As I was more than a few minutes behind schedule, I was a bit agitated and kept looking at my watch instead of watching the route. Much to my chagrin, I was uncharacteristically late for the appointment and learned subsequently that the architect had even tried to locate me through another architect!

Well, the meeting went off without a hitch. After it ended, I went down to the street. And then it dawned on me. I had absolutely no idea where I had stowed my wheels. So I went first in one direction and then in another. And when that did not pan out, I tried a different street altogether. Still no luck and no car.

After more than 30 minutes of unfruitful wandering, I came upon a Jonathan’s fast food restaurant. I knew there was another Jonathan’s near the parking lot so I went inside and asked the counter lady where I might find it. Usually in Japan explanations can be avoided entirely with tidy catch-all phrases. But this time the waitress’s puzzled look indicated I needed to clarify if I was to get the coveted information. I was too embarrassed to admit that I had lost my car so I pretended that I was meeting a friend at the other branch. My explanation led to a consultation in the kitchen followed by further interrogation followed, at last, by a hand drawn map. Sketch in hand, I set out once more. I made a few lefts, a few rights and finally … Eureka! There was the Harrier, calmly waiting for me as if nothing had happened.

This time I decided not to take any chances and opted for the subway despite multiple line changes. While driving has helped me put the parts of the city together, subway and foot travel allow me to see and enjoy the fine points that I would otherwise miss. Tokyo is so full of nooks and crannies. Under most circumstances I do not mind getting lost — there is always something interesting to look at. Viale, the yarn store I discovered near the architect’s office, was no exception. 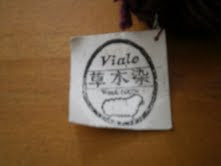 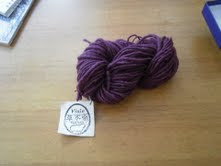 There is a lovely intimacy about this shop that begins the moment you come inside and trade your street shoes for their woven slippers. A step up leads you into another world. There Viale’s treasure trove of yarn, each skein lovingly dyed and spun by the shop’s artisan owner out back, are displayed artfully among looms, spinning wheels and beautifully crafted wood furniture. Made of silk and wool, the yarns are all colored exclusively with natural dyes that come from bugs, bark and other goodies. After much deliberation and banter with the proprietress, I selected three shades of purple wool with the plan of turning it into a hat.